This is my first post in my Photo Series 2: Understanding China as explained in my hook post.

A Phenomenon That I Wanted To Take Pictures Of

China has many people. Nearly 95% of them are located in the southeast on 45% of the land mass. However, population density is not unique to China. There are megacities on every continent with higher population densities. It’s the vastness of high population density that sets China apart. During my travels, there were few times that I couldn’t see a clump of high-rise apartments if I turned my head 360 degrees, Exorcist style. I wanted to capture this phenomenon with my camera.

Clearly, high population density photography has been done before, most famously by a man named Michael Wolf in an exhibition named Architecture of Density. 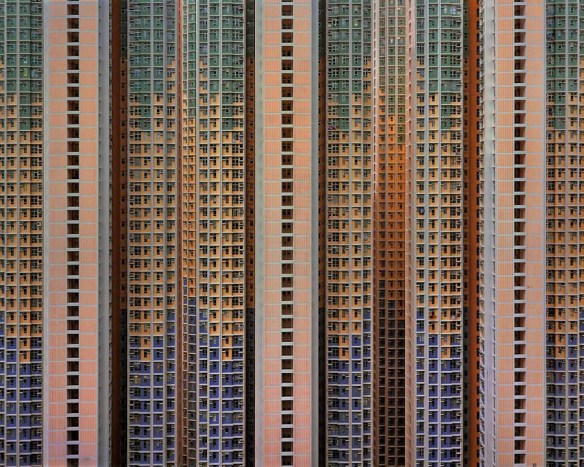 It’s one of my favorite collections of photography. Each picture is essentially the same as the one above, just with a different set of apartment buildings in Hong Kong. Definitely check out the link above.

Alternate Ways To Capture This Phenomenon

If you know how I operate, you know that I don’t like to do things that have been done before (what’s the point?). I could’ve taken pictures like Michael Wolf’s (albeit less good I assume), but I didn’t want to. Instead, I was excited by the puzzle: Take pictures that enforce Architecture of Density‘s thesis without copying Michael Wolf’s style.

My solutions were: Capture Z Depth, Use Glass Reflection, Emphasize The Hypotenuse, Concentrate on Negative Space.

Wolf’s photography tells us, “Look! x and y are huge!” But he tells us nothing about z, that these skyscrapers are nearly touching others in front and behind them. For “z-Depth” pictures, I tried to show buildings at as many z positions as possible. They are most effective when the contrast between buildings is high.

This picture captures some z depth and also repeating y depth. The roofs of lower buildings are at the same height as the entrance to higher buildings. (This city, Chongqing, is quite hilly.)

Another way to capture z is to use a building’s reflection of another building. The pictures below say, “Not only is this tall building here, but there is also another building directly across from it (behind the cameraman).” 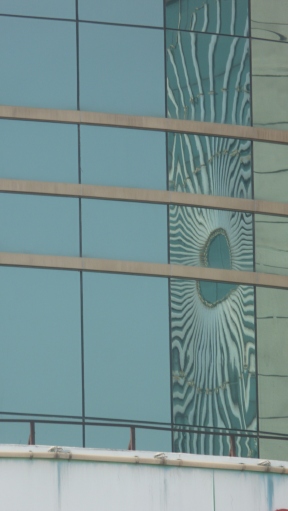 In Wolf’s pictures of width x and height y, we are amazed by how dense x is and how dense y is. Instead of bringing attention to x or y, the hypotenuse method brings attention to the hypotenuse of the picture, a longer line that can therefore have more in it (than just x or y in isolation).

When there are a bunch of tall buildings in tight proximity, the view of the sky becomes a strange geometric shape. I tried to capture this by concentrating on the negative space the buildings create, not the structures themselves.

Wolf didn’t leave too much room (zing!) for other angles on the density thesis. Three of my solutions involve the z-axis: Z Depth, Glass Reflection, and Hypotenusing. One of my solutions contradictorily involves the absence of building (Negative Space). I’m honestly not sure how much other photography design space exists here. I’d probably need to live in Hong Kong (like Wolf) to find it.

Hope you enjoyed this article as much as I enjoyed writing it. Drop comments and questions here or on various social media. Do you see other solutions to this puzzle? What’s your favorite picture?